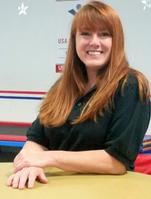 Alex, age 25, joined our coaching staff in March of 2013. He is a graduate of Crowley High School. He also holds a degree from SLCC in Culinary Arts. His gymnastics experience has been obtained from years of exposure to Rice City Gymnastics and ongoing training at the gym. Alex is a team coach and is a great asset as we grow.

Andrew, age 20, has been with us since we re-opened in January of 2013. He is currently a Honor Student at University of Louisiana at Lafayette. Andrew spent a year as a gymnast in Lafayette and is CPR and First Aid certified. He has a growing knowledge of gymnastics and is a great help in many of the classes.

Mrs. Ruthie, being the founder of Rice City Gymnastics, has been with us from the very beginning. She is a graduate of the University of Louisiana at Lafayette with a Bachelor of Science in Microbiology and Chemistry. Rice City Gymnastics began in a small church recreational center in 1980. It continued to grow until Mrs. Ruthie closed in 2000 to raise her two boys. During her first 20 years, she developed 8 State Champions, an All-Star Cheer Squad, taught balance beam at Bela Karolyi's summer camp and coached the International Rice Festival Gymsations. Over the course of the last year, she has acquired two additional State Champions and an LRG Level 2 State Champion team for the 2013-2014 competitive season. Mrs. Ruthie is USAG Safety, Kinder gym, CPR and First Aid certified. She is also a professional member of USA Gymnastics. It is with great pleasure that she re-opened in January of 2013. This state-of-the-art facility is her dream in action. We look forward to great things in the future for Rice City Gymnastics!